In this article, you will learn about the impact of different circuit components on battery cell models. How a battery cell behaves can be very closely approximated by the way an electrical circuit responds. The model developed using these ideas is called an equivalent circuit model. I will briefly present the meaning of each component in that model. Finally, I will demonstrate simulation results for a simple one-cell model, performed using Q-Bat simulation software.

The way in which the battery cell voltage responds to an electric current is modeled based on how a circuit voltage would differ for the same input current change. This circuit behaves in an equivalent way to how the battery cell behaves. We will start by introducing simple battery cell models. 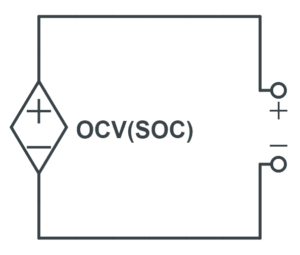 In the following parts, however, we will see what phenomena we are not able to model with such a simple model.

In the previous model, we did not consider that the voltage of the battery cell drops when the cell is loaded. This voltage drop can be modeled as resistance in a circuit connected in series with the voltage source. The cell voltage is equal to the open-circuit voltage as a function of the SOC minus the electric current multiplied by the specified resistance. An additional term in the voltage relation models the instantaneous response to a change in the input current. 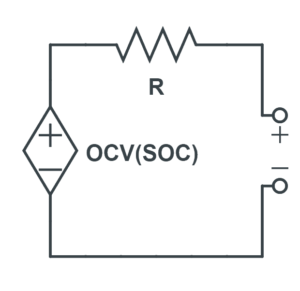 It appears that this model is often sufficient as a basis for creating simple circuits containing battery cells.

Previously, we added the resistance term that models the instantaneous voltage response to a change in the input current. In practice, we also observe a non-instantaneous response to change in input current – the battery cell’s voltage will continue to evolve over time due to some previous change in input current. So when we let our cell sit for a while, the voltage does not immediately return to constant open-circuit voltage, but gradually changes through a process that we call relaxation. In this case, we add a parallel resistor-capacitor branch in series with the current circuit model.

This improved circuit model (known as a Thevenin model) allows us to estimate cell terminal voltage relation as previously, minus the capacitor voltage. Thanks to adding resistor-capacitor sub-circuit we are now able to create a new model that describes diffusion processes in the lithium-ion battery cell. Moreover, the more such RC loops in our circuit, the smaller the timescales we can take into account.

Finally, let me present the simulation results showing the voltage distribution over time for the three models described above. In all cases, we assume a current signal simulating the discharging process of a battery at a certain time interval. 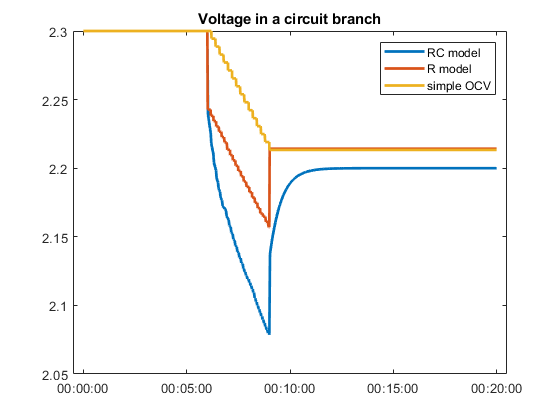 In the figure above, we can see both the phenomenon of battery cell voltage drop when we extend the model with a resistor and the effect of adding the RC part on the appearance of voltage diffusion.

I have presented three different equivalent circuit models showing the effect of the individual components of the circuit. You also learned about the relationship between these elements and the voltage. In Q-bat, we performed simple simulations showing you what the voltage relations look like depending on the current signal in the presented models.

We hope you liked this short summary of how to build a simple model of a lithium-ion cell and we’ll get back to you soon with some new, interesting topics!